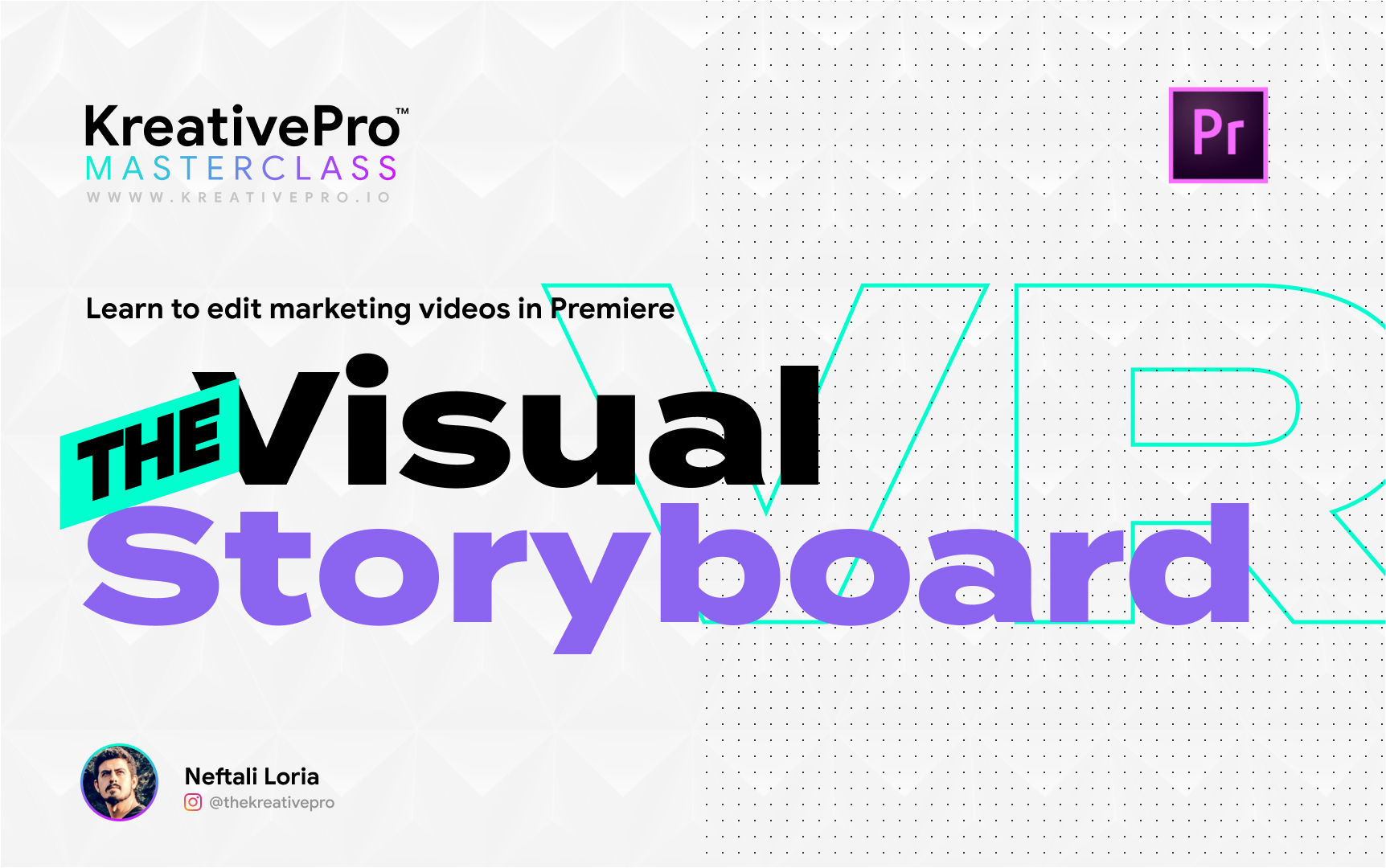 In this Adobe Premiere lesson we will browse through the visual storyboard and script of our marketing video campaign.

Hey, what's going on guys. All right. So on this lesson, let's go ahead and figure out our visual storyboard. The first thing that I like doing is checking out some stock footage. I use Envato elements. You can find a lot of really cool footage, you know, creating a storyboard does not have to be as elaborated as you know, having all this footage, we can use drawings, we can use sketches. The footage that I found will help us identify the narrative. So for example here. So I have my music, which are the songs that we already took a look at. I have the stock footage that we have, I have found interesting. You can browse through and see that some of the shots that I have are going to help us prepare some of the, a little bit of this visual storyboard, following the principles also that we took a look earlier.

Remember, we talked about lifestyle. We want to have the ability to see this product working in a real environment, trying to find the target audience that works best, and try to show that in our quick demo video. All right. So, so once you actually review all the footage that you have, what I like to do is find sequences and start thinking of ideas based on the sequences.

For example, I have this really nice sequence here where we have the world or the sun rising from the horizon that connects really well with this other footage of the globe spinning. So we could probably connect those two together. And then notice how the sun, as the sun is rising, we could see a little bit of his expression in his eyes, just like that, of the brightness of that sun hitting him.

In this case, I have here a couple of shots of the same area or the same environment. This, this is different angle than this one, but we could probably use this two shots to start creating a nice sequence. So this one can fit really well with this one. Another one here I have is this guy kind of playing around, moving things that fits really well with this other sequence.

So you can see here. This is, this is interesting. Now I can think of this for the watch parties. I can imagine here having these other characters being as holograms or glitching or some kind of effect. And he is the actual real one because he's playing online with other friends. So when you want to, when you find footage, make sure you have a couple of shots that follow the same sequence.

This is going to help you a lot when you're creating your video. Once I do that, I create, I add those ideas into my Milanote and I start tagging them. Okay. Like this guy is, starts coughing the theater. I know that that footage is going to be very good for us to use. We have what we talked about, the feature of the bright sun hitting, this other footage. So these two work really well together. Then I found this really cool footage of green-screen of this family kind of playing. They have their headset on, and now they're actually moving. Like they're part of they're immersed into a really cool movie or a game. And then I thought, well, that would be cool if we could combine that with a flying car.

And so I found this footage of a car flying over the streets. And I thought this would be a great combination together where as they move, then we have the car flying above them. That would be really cool to see, like we talked about, we have him being real and then the others are hologram or glitching or something.

So here's a couple of VR headsets that I also have. But I really like, and this is of course the one we used on the website, I can see like maybe we have a series of, of trailers happening. And if I play this in reverse notice what I can do here, I can actually zoom out as if I'm zooming out from the trailers.

And then we see the product shots of the VR headset as it moves away, maybe the, the logo. Gets revealed from behind the headset. So I ha I have here on my ideas, you know, some shots that I found from trailers that I think would be nice to combine. I want the trailers to be very visual, making almost immersive.

Once we have a good understanding of the sequences and footage, we can start creating our storyboard. Using the structure that we looked at. So for example, the hooks is going to be the strangers that are feeling uncomfortable because of some guy coughing a lot in the theater. So I wrote this little part of the script as, Hey, we get it.

2020 has changed everything. From there, what we want to do is move over to the globe spinning because I want to think about the tomorrow. Like what's going to happen tomorrow. I know we've gone through the past. We know that sucks. And now we want to move on to the future. So don't worry.

Better time is ahead of us. As the globe spins, we cut over to the sunrise. The music starts rising, say hello to the future. We're bringing again the content and there, the copy from the website. And then we see the guy kind of putting on his headset on. Zooming into the shot, blinded by the light.

And then we see an immerse yourself in the new era. We're still in the hook face. We're introducing the problem first, and then we're introducing a better tomorrow. From there, we have a series of cuts of quick shots of another people putting on their headset on maybe the girl's traps on her headset.

Then we see our grandma's strapping on her headset, and then we even see the family putting on their headset, so from here we start showing the solution. The solution is the era of unlimited entertainment, right away. We have some texts that tells you what this is, and we're going to transition into some movie trailers, unlimited movies, unlimited games.

What we talked about earlier. From there. We want to show some features, some demo, and I can imagine this guy with a green screen and on behind him, we have some of the interface, some of the UI from the stream VR application. Invite anyone  and everyone. Right away, we see a quick cut of a little girl kind of confused and amazed.

And maybe we have some texts behind her that says, Whoa, watch parties? And that's of course, one of the cool features of this. From there, we see a sequence of friends connected through VR. Maybe the people are glitching, just like we talked on the other scenes and yep. The future is together. So here, I'm kind of making an affirmation based on what the text based on the previous question.

Right? So we have that sequence. Continue along with some friends hosting a watch party as he invites more people over. So following this flow, we can see here that it transitions to a different demographic. Now previously on, on one of the demos that we saw, we use testimonials. Now, because this is a brand new product and experience using tech crunch or the wired magazine, adding some extra quotes of what they think about this product would be amazing to help your product, you know, feel that other people find it innovative.

Okay. So from there I was thinking, well, from there, we, we could zoom out maybe show a couple more trailers. Zoom zooms out into the headset. We see kind of like a space where we finished the shot and we reveal the logo and maybe finish up with a call to action. The call to action can be something like sign up for free forever, and then we have the website. Now this whole script, I'm thinking here, this one could be for a whole minute or 30 seconds. But in our example, I'd like to just tackle a 15 second one. So we might have to cut this a lot and just simplify it so that we actually have, or cover up these the most important points in our demo.

All right, guys. So let's jump to the next lesson so that I can show you how I typically start creating this with Adobe premiere.