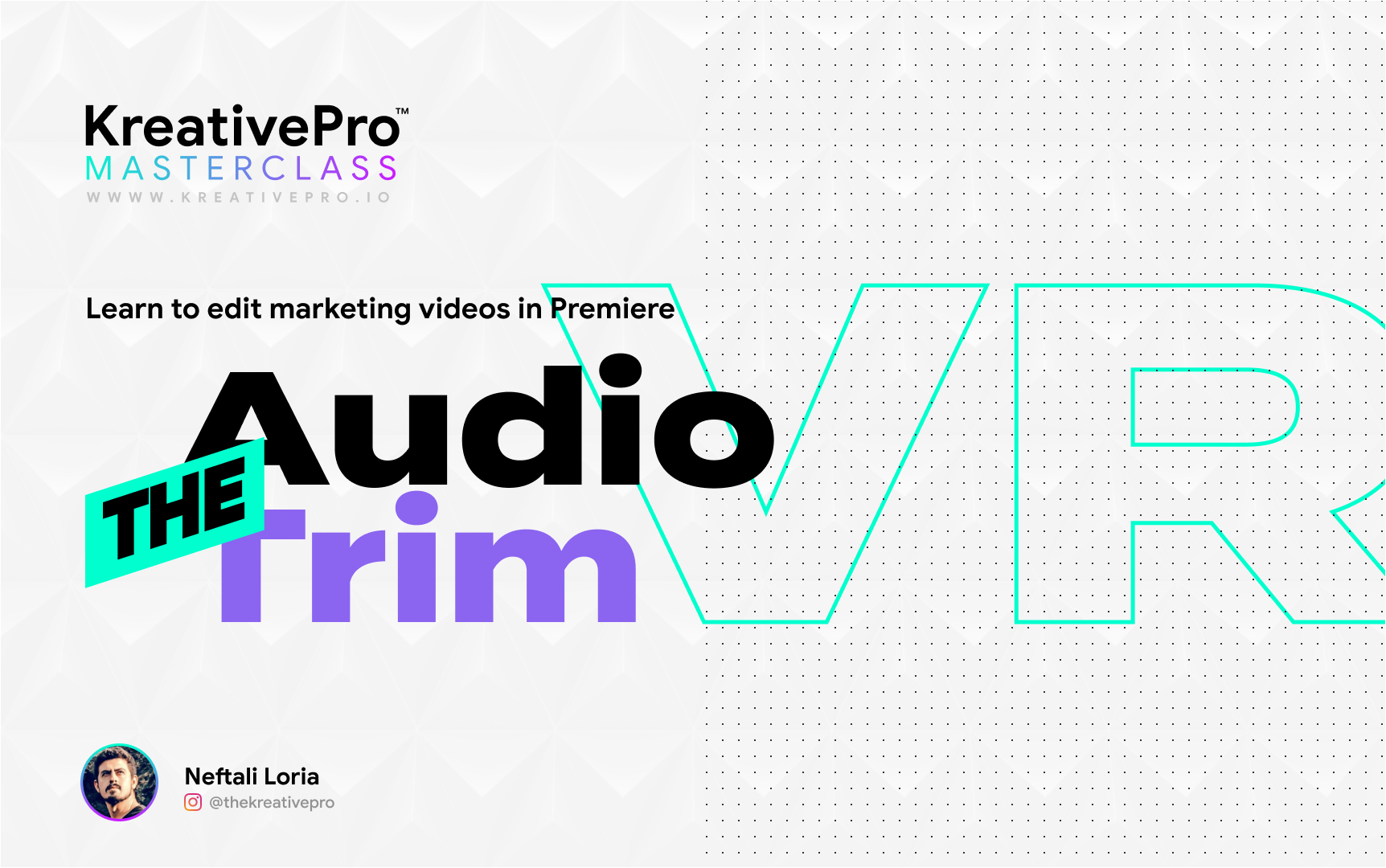 In this Adobe Premiere lesson, we will trim the audio track we selected in order to match our campaign timeframe.

The way I start typically a rough cut is by looking at the sound. So let's go back to our project demo and take a look at the music files that we have here. The one we liked is the drums, and I think it was drum short. So this is the whole audio file you can see here. If I make this a little bit bigger.
So what we want to do is crop part of the track. So we know what part of the track we want to play with. And that's why I had this open up like that. So let's listen, there's like a little bit of a dip here that I want to hear. So here let's listen to this.
So I like what's going on here. There's like this little. Gap or, you know, breather that allows us to play with as an intro. I don't like the intro straight into this because it's too repetitive. You can see the peaks are very repetitive, but from here, I feel like from here, we can play with that intro and then continue on, with the riff.
This one's a bit faster. You can feel that tempo's going really really fast.
And notice how I have these little markers here. These markers I've set them up. The same way I did this markers. And I'm trying to set the markers based on the tempo. So if you follow one, two, three, four, and so forth, and once you have those tempo beats, marked in this timeline, it's easier for you to do a lot more with the edit and let's take a look at the last part.
So there we go. So that little part right here, this ending is what we want to crop and add into our 15 second timeline. So we want this intro. We want a couple of these tempo beats, and then we want to crop it in here, so I can do that directly from here. So let's try that.
Am going to add in an in point. And then simply instead of this one, going to drag this one, right there,
there we go.
Okay, so right now
So this whole part of the song is about 15 seconds and I had the marker wrong. That's millisecond. Sorry about that. So let's move that to 15. So if we were to put in here 15, like that, that's where we want the marker. Okay. So from here, we can see there's a high peak happening right at this spot right here.
So, this is where we want to make our first cut of the song. And we want to essentially shift this over so that we can fit in the entire ending of the song. So right about here. Let's call it 12.9. Yeah, I think that's good. We're going to see that there's some sinking issues. The way I fix this is by finding another peaking spot.
So for example, if I move this just a little bit, and then I expand this, I can see that there is a peak happening right here. So that peak should be matching with this sound. If I move this just where that peak starts, we can try that again and see if it sounds okay.
So it's still not that great. I think we can move this a little bit more to see and we'd want to test. We want to experiment at what point exactly is where that peak is going to find the best balance of transition. So let's try it right here, let's try right here. So this one,
yeah, I think this is the spot where we want to sync in with the ending. So let's try that again. There we go. That sounded really good. Let's hear that again?
That's perfect. Okay. So now that we have our intro song ready, we have that first part.
The beats, great. And then the ending. Perfect. Okay. And then now we don't want to go past 15 seconds. So we want to crop this all the way up here. And the way to get rid of this extra. So it doesn't just cut off. We can use a transition effect. So if we go over to our editing, we have some effects here. We want to go into our audio transitions.
It's our crossfade and there's one called exponential fades. So we just want to add that into our favorites and then drag it at the very end of the timeline. You select that,
just like that. So that looks pretty good. We can expand this as much as we want.
All right guys. So this is managing the sound for our rough cut. So let's go and jump into the next lesson and start adding some of the sequences from our storyboard.